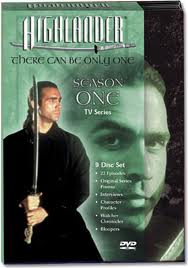 Series: Highlander Season 1 (1992-1993)
Length: 22 episodes (about 45 minutes each)
Lead Actors: Adrian Paul (Duncan MacLeod), Alexandra Vandernoot (Tessa Noël), Stan Kirsch (Richie Ryan)
Content Advisory: Swashbuckling violence, not much blood. Occasional sex scenes that are about the most that’s acceptable at a PG-13 level, but no explicit nudity. Occasional minor swearing.
Spoiler-free Synopsis: The adventures of Duncan MacLeod, a modern-day Immortal of Scottish heritage, as he tries to maintain a peaceful life with his mortal lover Tessa Noël and mentor the orphaned teenager Richie Ryan. All while avoiding or defeating other evil Immortals who seek to take his head, gain the power of the Quickening, and abuse unwitting humanity. Part urban fantasy swashbuckler, part crime drama, part love story.
Reason for Beginning Season: Recommended by a friend.
Reason for Finishing Season: It’s fun, occasionally thought-provoking, and shows a lot of promise.
Episode Re-watchability: Mainly the last two episodes of the season, which were noticeably better than the previous ones.
Recommendation: If the idea of sword-wielding Immortals carrying on a millennia-old war secretly while maintaining “normal” mortal aliases, their story told with many historical flashbacks, holds any appeal for you, then yes, you will likely enjoy this series. If that does not sound interesting to you, then you probably won’t enjoy it.

Obtainability: If you can’t get the DVDs, you can find the whole series on Hulu!

Adrian Paul plays Duncan MacLeod, a man with a noble nature who was born in the Scottish Highlands in 1592, was killed in a border dispute with a neighboring clan, and awoke again to find himself one of a small group called the Immortals. Now, the mythology of the show is fairly limited – there is a general framework in which a variety of different stories can be told, but few specific details are revealed. Immortals have existed since the beginning of human history, apparently, but there is no answer to why they exist, what makes them Immortal, and if there is any reason why some people are born Immortals and others aren’t. They do appear to be human, but for their Immortality. No superpowers, although with lives that last centuries or millennia they do tend to acquire formidable fighting skills, incredible memories, more knowledge than other humans, and, naturally, an intricate knowledge of history. 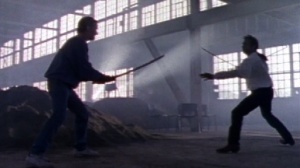 Also, it appears that every Immortal can make their personal sword appear whenever they need it. You’ll see them apparently unarmed, and then they’ll reach behind them, or under their coat, and suddenly be brandishing a claymore or something. Seems to come with the territory. But why do they need swords? Ah, because Immortals can be killed…but only if they lose their head. When one Immortal beheads another, he gains the dead one’s knowledge in an event known as the Quickening, which involves gratuitous lightning and anything in a 50 foot radius randomly blowing up. The only safe place, where Immortals cannot (or will not) kill each other, his “holy ground,” that is, any place that has been consecrated by a religion. Cathedrals, Indian burial grounds, Buddhist temples, etc. Evil Immortals spend their centuries head-hunting, because the assumed knowledge is that soon (unspecified, just “soon”) will be the time of the Gathering, when the last two Immortals will battle for the fate of the universe. Why? Because “In the end, there can be only one!” Good Immortals, like MacLeod, refuse to play this “Game,” and attempt to lead normal lives and protect the ones they love. Highlander is about MacLeod’s inability to escape “The Game,” as the fame he has garnered in 400 years means that villainous Immortals are constantly trying to take his head or do bad things around him. A swordfight occurs in every episode.

The premise is great, of course, but the impression of the first couple episodes is that it is pretty cheesy, with writing that takes shortcuts to clichés and often third-rate or worse acting. (One episode involved killer mimes, and it was just as ridiculous as it sounds!) Subtlety is rare. Villains have a tendency to delightfully gnash their teeth (see Slan Quince on left). One episode is a clear retread of The Phantom of the Opera, with a mentally-ill Immortal living beneath the Paris Opera House becoming obsessed with a diva, and the writing simply isn’t up to the concept. Numerous female Immortals have the role of sexy femme fatale, but they are usually played by guest rock stars who haven’t the acting chops to make the hackneyed dialogue sound believable (see Episode 18 “The Lady and the Tiger”)

But if you give it a chance you’ll see depth and thoughtfulness slowly develop in both the writing and performances. The standard episode involves an Immortal from MacLeod’s past showing up to commit some crime that only MacLeod, with his special knowledge and ability to sense other Immortals, can solve. Interesting concepts develop: the world’s greatest assassin being an Immortal with an Übermensch complex, a Catholic monk having been the world’s bloodiest general thousands of years ago until he repented, an Immortal who has renounced civilization to live isolated in the forests of the Pacific Northwest, etc. And not all the guest-stars are that bad – Werner Stocker is great as the gentle Immortal monk Darius, and Jason Isaacs (of Harry Potter, The Patriot, and the 2003 Peter Pan) makes an entertaining appearance as a villainous cat burglar (he’s probably the best actor to have ever appeared on this show).

Adrian Paul turns out to be an excellent casting choice. He has MacLeod’s easy-going nobility, love of justice, fierce loyalty, and playful humor. And Alexandra Vandernoot is great as Tessa, his lover. She’s his perfect match, really. Beautiful and thoughtful, she acts as a gentler, emotional counterpoint to his sometimes colder methods. You believe that even an Immortal who has been loved by many women in hundreds of years could still decide that she is the one mortal worth spending his life with – even though they both acknowledge the tragic fact that one day she will die, while he must continue one forever without her. Yet their openness about this makes their commitment to each other all the more touching. Sometimes there is an episode where a female Immortal is revealed as having been a love interest for MacLeod some two hundred years ago, and Tessa wonders how she can compete with that. But when MacLeod looks her in the eye and tells her that in all his four hundred years he has never met a woman to compare with her, you believe him, and sense that he is telling the absolute truth.

The best episodes are those that involve tough moral choices for MacLeod, and fortunately by the end of the season those started to become more frequent and better handled. For instance, one episode involves a rich young man who rapes a girl, thinking that his father (an old friend of Tessa’s) can get him out of any ensuing trouble. Problem is, the girl he raped has an Immortal for a single stepfather…an Immortal with over a century of combat experience and every intention of taking violent vengeance outside the law. This Immortal-Avenger-Dad gathers a squad of his fanatical military buddies and lays siege to the young man’s mansion, right when MacLeod and Tessa are visiting. MacLeod learns of the accusation but isn’t sure if the boy truly is guilty (the boy, naturally, denies it). He despises rape, but also despises revenge. So does he defend the rapist against the wronged Immortal in the name of due process of law, or does he acknowledge that the law probably won’t give the boy what he deserves and so hand him over to be murdered?

That’s an example, and I like the show’s treatment of those themes. Characters develop slowly, but each episode has some genuine emotional content that keeps it meaningful. Also, the premise is a great excuse for historical flashbacks to all sorts of time periods, involving great costumes, a greater variety of sets, and a ton of great swords. The show also changes setting mid-season, and has a great in-universe reason for why. If an Immortal stays in one place for more than twenty years or so, people will begin to notice that they aren’t aging. So they have to keep moving. MacLeod, Tessa, and Richie start the season in the fictional Seacouver, Washington state, but halfway through move to Paris. Visually the show improves greatly after the move, making good use of Parisian backdrops like Notre Dame, the Seine, and classy corner cafés.

It’s become a fun excursion for me, and I enjoy returning to the characters each time. Rumor has it that the later seasons only continue to improve, and I look forward to joining the further adventures of Duncan MacLeod.