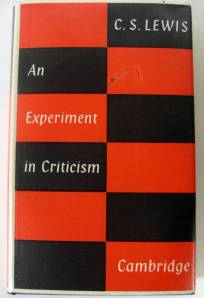 Unfortunately, this will be my last post in Lewis’ book, at least for the time being. Why? The book is due back to the library tomorrow and I’ve already renewed it twice. But weep not, my friends! For this is one of the more important chapters for understanding what people like Lewis, Tolkien, and MacDonald (hereafter grouped together as the Great Trio) meant when they spoke of myths and fairy stories.

You see, it’s so dreadfully hard to define the word myth, in its deepest sense. Obviously we are not using the word to mean merely “an untrue story,” as you hear the Mythbusters use it. We are using it closer to the cultural sense: the Greek myths, the Egyptian myths, the Scandinavian myths, the Chinese myths, and etcetera. And yet, not completely in this sense. The Great Trio tend to accord the kind of story called myth a reverence and awe which I do not see in many of the stories I read in my classics and ancient history courses. The story of Ares and Aphrodite getting caught, mid-coitus, in Hephaestus’ net and exposed to all the deities of Olympus seems more akin to a medieval fabliau than Eros’ wooing of Psyche.

And indeed, Lewis himself admits this disconnect:

If we go steadily through all the myths of any people we shall be appalled by much of what we read. Most of them…are to us meaningless and shocking; shocking not only by their cruelty and obscenity but by their apparent silliness—almost what seems insanity. Out of this rank of squalid undergrowth the great myths—Orpheus, Demeter and Persephone, the Hesperides, Balder, Ragnarok, or Ilmarinen’s forging of the Sampo—rise like elms.

Those great myths—the ones we remember most strongly and poignantly—clearly have a different nature than their lesser cousins. They are retold in endless variations, they are alluded to in poetry and literature, they become reference points even in everyday speech, and they provide subjects for art all through the ages. The thing is, we can find similar kinds of stories that have been written even in recent times, by specific authors rather than anonymous cultural entities. Dr. Jekyll and Mr. Hyde, for one, and A Christmas Carol for another. We might call these stories “mythic,” because they share a certain nature with the great myths.

But what is this nature after all? While acknowledging the difficulty and even subjectivity of myth, Lewis puts forward five characteristics all its types have in common:

Looking at this list, Lewis and I both notice the same thread running through it: he is describing myth based on its effect on us. The application of the label myth to any particular story must then have some element of subjectivity to it. Imagine the tip of an iceberg. We know there is a great something floating beneath the arctic waves, and but we are not concerned with it. We are concerned with the tip itself as an object worthy of contemplation. Likewise there is much that can be said about the psychology behind mythical stories, why they affect us and how they have developed, and those studies are fine. But they are irrelevant here. We are concerned with how people read, and specifically with how they experience stories. And a lover of a myth loves the myth no matter how he receives it, even if it is through a bad storyteller.

But wait! Didn’t Lewis earlier accuse unliterary readers of attending exclusively to the plot and ignoring the words by which the story is told? Yes. But the lover of myth uses this “procedure” where it is appropriate, and only because the very nature of myth provokes it. Of course, a myth can be told through superlative literature. Frequently they are. And,

…[the lover of myth] will then delight in that literary work for its own sake. But this literary delight will be distinct from his appreciation of the myth; just as our pictorial enjoyment of Botticelli’s Birth of Venus is distinct from our reactions, whatever they may be, to the myth it celebrates.

But an element of subjectivity remains. And here comes one of Lewis’ most important warnings:

We must never assume that we know exactly what is happening when anyone else reads a book.

Some books are more likely to produce excellent experiences than others, but two people may read the same book, and one enjoy it only as entertainment, while the other walks away deeply moved and forever changed.