I’m adapting and expanding this article from one that I originally posted on my old Xanga site back in April 2010. Because of this, it doesn’t really follow the format I established in my previous post about the Cid of discussing first the source material, then the historical background, and finally the hero himself. This time it’s more a rumination on the, well, oddness of the title character.

The entire story, in addition to six more tales from Scandinavia, can be found in Seven Viking Romances.

Viking sagas don’t always have protagonists that are very sympathetic, and it can be annoying when the text itself doesn’t seem to realize this. Take, for instance, the saga of Örvar-Oddr, a.k.a. Arrow-Odd. It was written down in the 13th century, in Iceland, as most Viking sagas were, and concerns the adventures and fate of the titular hero.

As a boy growing up, Odd has a completely envious life, but frankly is an egotistic jerk. First, he has famous and excellent parents: his good father Grim Hairy-Cheek (sic) is the son of the great hero Ketil Trout, and his beautiful mother is Lofthæna, daughter of chief Harald of Oslofjord (an immensely important port). He is raised by Ingjald of Berurjord, who is well off and treats him like a prince alongside his own son, Asmund. So Odd grows up living very comfortably, well-loved, with a ready-made best friend/step-brother, and utterly doted upon by almost everyone…except for when they whisper about how he’s kind of an insensitive jerk behind his back. Consider this:

Odd has his own specially-made arrows, but he leaves them laying around everywhere, so that some people have gotten hurt by accidentally sitting on them. So Ingjald says:

‘There’s one thing, foster-son, that gets you a bad name…You don’t take proper care of your arrows like other people.’
‘I’d have thought you could only blame me if you’d given me something to keep them in,’ said Odd.
‘Whatever you want, I’ll give you,’ said Ingjald.
‘I don’t think you will,’ said Odd.
‘That’s not so,’ said Ingjald.
‘You’ve a black three-year-old goat,’ said Odd. ‘I want it killed and the skin flayed off in one piece, with the horns and the hooves.’

See what I mean?  His foster-father comes to him with a reasonable request, and Odd immediately blames him for not pampering him enough. Then, when Ingjald agrees to give him whatever he asks for, Odd makes a very expensive and unusual request. And he is never grateful.

Okay, so that’s how he acts for about half of this very long saga. Beside the violence. There’s a prophecy that moves the plot along and is fairly interesting – a witch woman visits their home, Odd insults and assaults her, and so she delivers the prophecy that he will die here, in his foster-father’s home (instead of on the sea or in battle as a Viking should), and that the cause of his death will be the skull of his horse Faxi. Because only this can be his death, that does mean that nothing else can kill him – and that he will live for 300 years. After this, Odd and his step-brother Asmund leave to go a-viking, because he is determined to defy the prophecy and win more glory than any other warrior. Before they leave, he kills the horse Faxi and buries by the sea, as a Take That. (SPOILER: he still dies by the horse’s skull in the end!)

So Odd sails all over the northern seas, raiding and plundering, and seeking out famous warriors to defeat them and gain glory. He becomes more and more famous. He fights giants in Finland (called Permia back then) and Lappland, he acquires a magic bow-and-arrows called Gusir’s Gifts that always hit their mark, always kill, and always fly back to the owner. Asmund dies in Ireland (while attacking people), and Odd goes on a bloody rampage until a gorgeous Irish woman (named Olvor) offers to make him a magic mail shirt, and then marry him.  So he gets this gift from her, marries her, sires a daughter, and promptly leaves before the child is born.  What a charmer.

The saga doesn’t keep track of time very well, but you gradually get the sense that generations do start to pass.  Odd’s name is becoming legendary everywhere, and whereas at the beginning he was seeking out the famous warriors to defeat, now the glory-seeking young Vikings are seeking him out.  Still he remains undefeated.  And, thankfully, time seems to mellow him a bit.  As he passes 100 and moves further through his life, he is less and less a jerk. A bloody fighter always, and supremely confidant, but he tends to get a bit less abrasive with strangers.

I will now talk briefly about two parts I really do like about this saga. Firstly, a mysterious fellow named Red-Beard that Odd meets late in the story. At this point, Odd is alone and wandering in the wilderness – all the men of his latest raiding party were slain by giants in a strange land, and he has wandered alone for many years now.  Then…

One day Odd came out of the forest very tired, and sat down under an oak tree. Then he saw a man walking by, about middle height, wearing a blue-striped cloak and high boots, and carrying a reed in his hand. He wore gold-emblazoned gloves and had a courteous look about him, though a hood concealed his face. He had large moustaches and a long beard, both red in colour. He turned towards where Odd was sitting, and greeted him by name. Odd returns his greeting in a friendly way and asked who he was. He said his name was Beard and that he was known as Red-Beard. 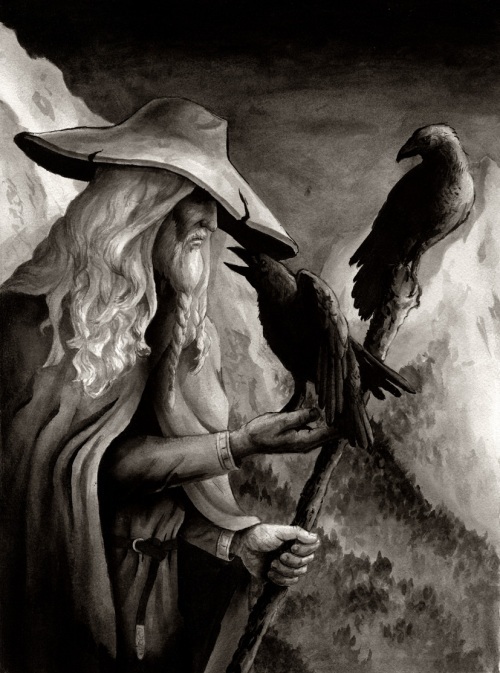 Does this remind you of anyone? Well, perhaps not immediately. I happened to pick it up at once, but for those not tuned to this kind of description, it might take a while to notice various things about this man. For one, he refuses to fight – very unusual for a Viking – and yet he gives uncannily good advice, and seem to appear and disappear often. Plus, no other character in the saga gets quite as detailed a physical description as him, even though he is only around for a few chapters. Perhaps one reason you may not recognize him is that he is missing his customary companions: 2 ravens, 2 wolves, and a very peculiar steed. Any guesses?  Anybody, anybody?

He’s Odin!  Yes indeed, good ol’ Odin, who loves to travel incognito as an old man to make sure mortals are acting the way they are supposed to. Odin, whose general fashion sense (if not colors) and mystique were passed on directly to our friend Gandalf the Grey. Anyway, it was fun to spot him in the saga and recognize his true identity long before the main characters did.  +)

The other thing I like is the character of Hjalmar, a stout warrior who joins Odd’s crew for much of the latter half of the saga. He’s a good guy, and while he’s one of the strongest warriors around, he’s unusual because he doesn’t desire battle glory so much. All he desires is the hand of the lovely Ingibjorg in marriage. They are intensely in love, but Ingibjorg’s father is wealthy and won’t let Hjalmar marry her unless he can prove his worth. So he set out on his own, a-viking and gaining glory and wealth, and joining up with Odd for so many years. Then, in single combat with another Viking on a raid, Hjalmar is mortally wounded. He kills his opponent, then stumbles against a nearby hummock.  Odd rushes over to him.

‘It’s been proved right,’ said Odd, what I told you; it would never do for us if you were to fight Angantyr.’
…said Hjalmar, ‘Everyone has to die.’ 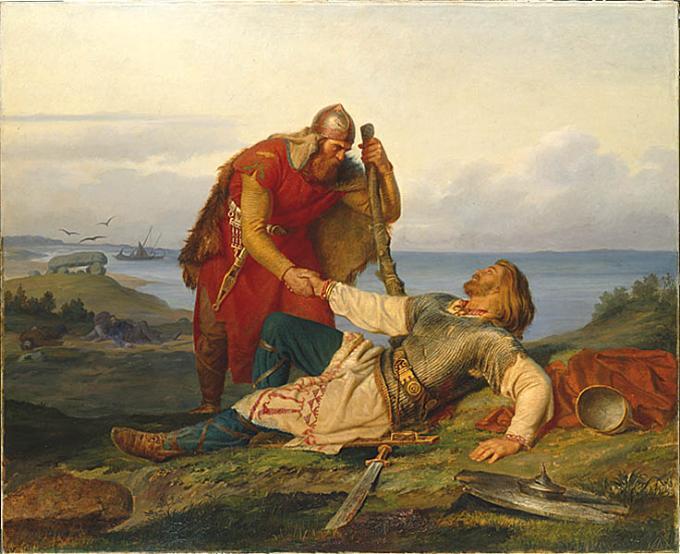 Then he tells Odd to bring his body back to Sweden, to his dear love Ingibjorg, along with this poem he composes, where he relates (for her father’s benefit) all the glories and honors he has won. In the poem, he apologizes to Ingibjorg for ever leaving her side, and for causing her grief by dying, though it is what is expected of him.  Then he tells Odd, still in poetic verse,

Take the ring from my arm,
The red bracelet,
The gift given
To the girl Ingibjorg:
Deep in her mind
The maid will mourn
That nevermore
We two shall meet.
Well I remember
The women, seated,
Persuading me – don’t
Set out from Sigtun:
Ale and good company
In the king’s hall
Will never again
Gladden Hjalmar’s heart.

Odd takes not only the arm-ring, but also Hjalmar’s body, back with him to Ingibjorg.  He tells her what happened and gives her the ring, with Hjalmar’s message.

‘Here’s the bracelet,’ said Odd, ‘which Hjalmar sent you with his greetings on the day he died.’
She [Ingibjorg] took the bracelet and looked at it in silence. Then she leaned back against the chair posts and died.

It is easily the most touching moment in the poem. The two lovers who could not be together in life, will be together in death. Part of the reason it is so touching here is that it’s such a rare spot of romanticism in an otherwise cold, hard tale. Odd is no romantic, and no one in this world waxes poetic about love like medieval knights and troubadours. But still they can have intense affection like anyone else.  Odd buries them together, and Ingibjorg’s father, greatly saddened, holds a funeral feast in Hjalmar’s honor. It is a rare, sad, quiet break in the poem’s violent escapades. When it is done, Odd leaves to once more search the world for his arch-nemesis, Ogmund Eythjof’s-Killer. The rest of the tale I will leave you to discover on your own.